The internet is not short on tips for learning guitar, and just about anyone who has picked up the instrument has an opinion on what are the best guitar tips to follow. How does a novice know what is good advice and what isn’t? Rather than focus on sharing guitar pointers or avoiding bad guitar habits, we’re going to dive further into what advice is actually worth listening to and what should be avoided.

For example, it’s often said that those who wish to learn guitar should start with an acoustic guitar. Does this sound familiar? It’s a common piece of advice uttered by some guitarists, teachers, and parents alike, but have you ever considered the theory behind why? When learning any instrument, it’s important to remember that you play how you practice.

What is the worst guitar advice you ever received?

In the world of learning music, there are many bad guitar tips to avoid. First and foremost, remember that it’s important to start your learning path with the instrument of choice, not a substitute that merely acts as a placeholder.

Acoustic guitars, generally speaking, have larger bodies, thicker necks, bigger frets, and larger gauge strings. All these things make the instrument more physically demanding and difficult to make clear sounds for the inexperienced guitarist. If the goal is to play electric guitar, then start with electric guitar. All guitars are tuned the same way, and played with similar techniques, so why burden yourself with learning a more difficult instrument that doesn’t even yield the sound you’re looking for?

What are the top worst guitar tips?

It’s important to be intentional about what in the advice is unhelpful, unnecessary, or potentially harmful. Some bad advice isn’t harmful as much as it’s unhelpful. We all know that learning music is a very individualized experience. No two paths are the same. If the goal is to learn what you want to learn, then be wary of advice that is overly general like “you must first learn to read music” or “you have to learn scales before you can solo”.

Reading music and playing scales are very common guitar tips for beginners. And this kind of advice doesn’t suggest things that are physically harmful or technically unsound. But it’s also unhelpful if it doesn’t consider your motivation for playing and your ultimate goal as a musician. 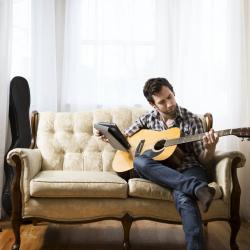 There are plenty of exceptional guitarists like Wes Montgomery and Robert Johnson who never learned to read music. Learning to read music will not make you a great guitarist or a bad one. What it will do is simply give you another tool in your toolbox.

Additionally, scales can be very helpful. In the words of the great guitarist Richie Hart, “scales are really good for fish.” What may be lost in the sarcasm, is the fact that you’ll never put on music and hear a guitar player playing up and down scales in a piece of music. Scales are helpful to learn relationships between notes in a given tonal environment, but they don’t teach how to actually make music. A guitarist can just as easily learn how to improvise and play lead by transcribing other guitarists and playing their music. The latter will arguably fuel more rapid learning and digestion of material than simply going through rote exercises that lack all musicality.

Many guitar picking tips will revolve around scales or finger patterns on the fretboard. Whether it’s for the sake of developing dexterity in the left hand, alternate picking speed and accuracy in the right hand, or some combination thereof, be clear about the purpose and avoid the delusion that you’re making music with these exercises.

Play on your fingertips

This is a bit misleading and can lead to severe frustration. To the casual observer, it does look like a guitarist is playing on their fingertips. Often teachers or YouTube “experts” will reference playing on fingertips as an easy way to skirt a longer topic of how and where to press the fingers on the strings.

Playing directly on the fingertips would be inefficient and potentially painful. It would require keeping an arc of the hand that isn’t realistic for extended periods of time. If the fingertips and pads of fingers were circles in a Venn diagram, a guitarist will be pressing down the strings on the area that overlaps both. This area is just below the tips but not quite on the pads of the fingers.

Always use your pinky

There is great debate with guitarists regarding the use of the fourth finger and whether it should always be used or avoided. One can look no further than Django Reinhardt to see that it’s possible to achieve some incredible skills using only two fingers, let alone only three or four.

The reality is, the answer to this question is a stylistic one. A guitarist’s fingers, and how they’re used, will ultimately have the greatest effect on phrasing and articulation. By removing use of the fourth finger, a guitar player is forced to use phrasing techniques like sliding, glissando, bending, etc. more often than with an extra finger. The extra finger will eliminate some need for more expressive articulation, in exchange for greater dexterity.

Many guitarists may argue, however, that what you can do with four fingers, you can do with three. Ultimately, the answer lies with who is doing the playing and what sound they’re trying to emulate. Avoid advice that stresses “always” or “never”, since there is always an exception to the rule in art.

What should you not do while playing guitar?

In addition to the bad guitar tips noted above, here are a few other things to avoid while playing guitar. It’s absolutely critical not to be unconcerned with your technique, or how you play what you play. Beginners are often so consumed with what they are playing that they forget how they’re actually executing it. By concerning yourself with musical elements of playing music, you’re more likely to emulate the sound and style you’ve set out to achieve.

To that end, it’s important to remember not to rush. Trying to play fast for the sake of playing fast will ultimately lead to problems down the road. Slow down, listen for the feel, phrasing, articulation, and dynamics. As it has been famously said, “if you can’t play it slow, you can’t play it fast.”

Don’t ignore problem areas or inconsistencies in your playing. If you practice sloppy, you will play sloppy. Repetition and practice is key, but remember to execute well and not gloss over problem spots.

Focus will help you get deeper into your music. Distractions will make it harder to excel and improve. Diverting your attention while you’re trying to practice will inevitably make the learning curve steeper and more frustrating. When you’re diligently working to make musical gains, avoid having the TV on in the background, or dividing your attention by conversing with others, eating, or being within earshot of other music being played loudly.

Why do guitarists wiggle their fingers? 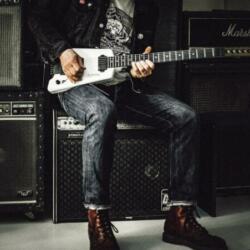 Vibrato is a beautiful phrasing technique executed in a few different ways. Perhaps you’ve seen a guitarist move their finger up and down on a single note, in a wiggling motion, or move their hand back and forth without lifting the finger off a single note.

For those unfamiliar with the sound or its effect, it’s often asked as a reference to sloppy playing or a nervous habit. Neither could be further from the truth. Guitarists will create this effect in the same way that a singer will produce the vibrating sound during long tones. When playing a note on the guitar, the fingers can pull the string down and up to change the pitch slightly with each movement creating the effect. Similarly, pressing and pulling the string from the near fret to the back will stretch and tighten the string, producing a similar effect.

It takes a good amount of hand strength to create a powerful vibrato. Practicing vibrato is, itself, a great exercise to improve guitar playing. Some quality hand exercises for guitar players to strengthen their hands include finger tapping on tabletops, bending fingers backward until the point just before discomfort, and dressing wrists together in a praying position while moving the arms up and down. The latter will strengthen your palms as well as stretch your forearms and alleviate tension.

Listen, and let the music be your guide

If a guitar player tells you to “always” or “never”, chances are they are stuck within the confines of their own limited scope. We all hear differently and we will all play differently. The worst advice is the advice that goes against helping you achieve your goals. So at the end of the day, the music should be your guide, and it will never lie to you.

Pick the instrument you love, and dive right in. Learn the material that motivates you and inspires you to want to get better. Find the touch and feel that is most comfortable for you, and use your body to create the phrasing that speaks that you want to be heard. Work on problem areas and be intentional with your practice time to get the most out of it.

Finding a great music teacher, whose ears and mind are open and ready to help without ego will be your key to improving and getting to where you want to go. Finding a teacher with patience, who is open minded and ready to help you explore your music on your schedule is easy with Forbes Music Company.